You can demo a bathroom in Delaware by following these steps. First, be sure to prepare the space and yourself. Wear gloves and a mask, as well as eye protection if you are demoing an old bathtub or shower. Next, remove the vanity and mirror from the wall with a crowbar before starting the demo on the toilet or bath/shower enclosure. Once everything has been removed it is time to clean up any messes left behind!

Sounds simple, right? Well before you strap on those gloves and mask, let’s take a deeper dive and see what demoing a bathroom entails.

The demo process starts with removing all the fixtures and cabinetry, including sinks and toilets. There are three main methods for demo: using an electric saw to cut through framing; tearing down walls or other structures manually, or simply cutting around pipes with a hacksaw blade that will not be reused when it is time to reconstruct the space. If you’re demoing an old bathtub or shower enclosure, consider how much cleanup will need to occur afterward before starting in on demolition work!

Prepping for a bathroom demo

– Remove any personal items from the demo area

– Turn off water and gas lines

– Cover up messes left behind with tarps, drop cloths, or other protective coverings.

Now’s not the time for your kids to come in and make a bigger mess!

This is also a good time to remove any paper towels or toiletries that may be in the demo space, as well. Nothing should remain except demo work tools – you don’t want them getting into dangerous materials later on. You can anticipate about an hour’s worth of prep per bathroom demo; if there are multiple bathrooms involved it will take more time. The average small bathroom demo job can take about two hours. If you are working on demoing a larger bathroom, with a bathtub or shower, you can expect it to take more time.

The best place to start in my opinion is removing the bathroom mirror. You can do this with a screwdriver, by popping off the mirror’s back piece.

There are two ways to demo mirrors: you can remove them or use an adhesive remover. The first is more time-consuming as you’ll need to scrape and chip away at it. But if there’s no good way for you to get up high enough (such as on top of the vanity) then removing the mirror may be your only option! If that’s not possible, using an adhesive remover will make things much easier… but since those solvents have chemicals in them they should never be used where people might come into contact with them; such as on countertops around sinks and near toilets! So always spread out some newspaper

What happens if you crack the mirror??

Watch out for shattering remains! Basically, don’t do this too close to people who are passing by! Be sure to clean up any leftover glass if this does occur.

How to remove a vanity

Since demoing a bathroom in Delaware can be tough, it’s always best to start with the vanity and find out how difficult or easy this is first. If you have access from above on top of your countertop then removing that should be much easier than taking everything down! So make sure you know where your power outlets are before making any changes… if they’re under the sink (or even hanging by hooks) then there may not be enough room for someone else who needs to get their hands underneath as well! To remove the drawer, pull back on either side until they pop off and lift up at an angle – try putting something like a paint roller handle between them so it won’t fall all over your floor.

Removing a toilet during a demo

Removing the toilet is one of those demo tasks that can be a little tricky if you are not around to move it. The first thing you want to do is find where all your risers and bolts have been drilled into the floor – these will help you keep track, as well as make sure you don’t miss anything! Once everything’s taken off, there should only be four or five bolts left on each side; depending on how much space there was between them in installation. Make a note for yourself so that later when you’re ready to put them back up, they’ll go right onto the same spot with minimal effort.

Now, place your hand behind the bottom of the toilet tank and gently rock it from side to side, until the bolts loosen and pull the toilet away. You can now remove any remaining water in the tank by opening up a valve on top of it (again, make a note for later).

The next step is adding some elbow grease – you’ll need to grab one of those demo hammers with a chisel at one end usually used for demo work or use your own trusty ol’ claw hammer and start hitting away at all four corners that are still connected: this will loosen them enough so that they disconnect without much force needed; just keep tapping until they come off! Once you’ve removed every bolt left, take out whatever remains underneath like wax rings and gaskets. With any luck, you won’t need to use the hammer and some jiggle back and forth will be enough.

Before you move on, be sure to tag a towel and plug up the opening hole. You’ll be surprised by how fast demo dust can come up from that hole, and it helps keep any debris from falling through the pipes.

Next, we move on to getting rid of that old tile. It seems to be a little more difficult than demoing the vanity, but it can still be done in one day if you’re willing to put in some hard work.

Begin by using your hammer and chisel combo on those pesky adhesive tiles that are holding up everything else: these will come off pretty quickly with just a few blows of the hammer! Now comes the tedious part- removing all the grout from between each tile is not easy, even when there’s no glue or mortar left behind. But don’t fret because we have an old childhood trick for this situation here: use a toothbrush and scrub pad together to scrape away anything stuck down.

Be sure to scrape away any mortar if there is still some left from the rip-up.

Tear out the bathtub or shower

This demo process will be different for bathtubs or showers. If you’re demoing a shower, remove the doors and liner before demoing the rest of it. For baths, demo around the perimeter first by removing any caulk between tile and tub/shower surround wall with an adhesive remover like Goo Gone to loosen up those areas that need extra attention so they can come off easily. Again, use your hammer and chisel combo again on these spots where there is either glue or mortar left behind.

Removing the tub or shower can be a lot of hard work on your back, so if you demo a bathtub, it may be easier to demo the walls at knee height first and then demo the tub. If demoing a shower, remove those pieces before demoing the rest of it, or else your back could suffer for days!

To get down into tight spaces as well as pry off stubborn tile/caulk that won’t come up with just hammer-and-chisel work alone, use small crowbars (specially designed for this purpose).

Again: USE GLOVES TO AVOID CONTACT WITH MOLD AND BACTERIA!!! These are generally found by removing debris from around these areas.

Can you demo a bathroom with mold

Yes, demoing a bathroom with mold can be done. However, you need to keep in mind the following:

– Wear protective gloves and clothing! Protective gear is essential for demo work because of the high risk of exposure to harmful substances like lead paint or asbestos as well as infectious agents such as bacteria and viruses. Remember that these are airborne particles which mean they travel through the air invisibly and settle on surfaces and then get inhaled into your lungs. You should also wear goggles since dust may fly up during demo work.

Once you identify the sections of mold you want to remove, you can either scrape it away with a putty knife or peel off the moldy surface layer.

– You should always use bleach and water (at a ratio of one cup to two cups) when cleaning up any remaining mold after demoing – this will kill the spores which are harmful if inhaled.

Finally, once these items have been removed, vacuum behind them so that they don’t leave dust on the wall surfaces. Next, take out any baseboards by unscrewing nails in the corners where possible and prying at others until loosened enough to bend outward without breaking. Undo screws holding drywall panels and remove the old drywall. Be wary of any electrical wires or running water pipes.

Now your bathroom is nice and demolished!

What tools do you need to complete a bathroom demo

The demo process is not an easy or quick endeavor for the inexperienced, but with preparation and a little elbow grease, you’ll be able to demo your bathroom in Delaware 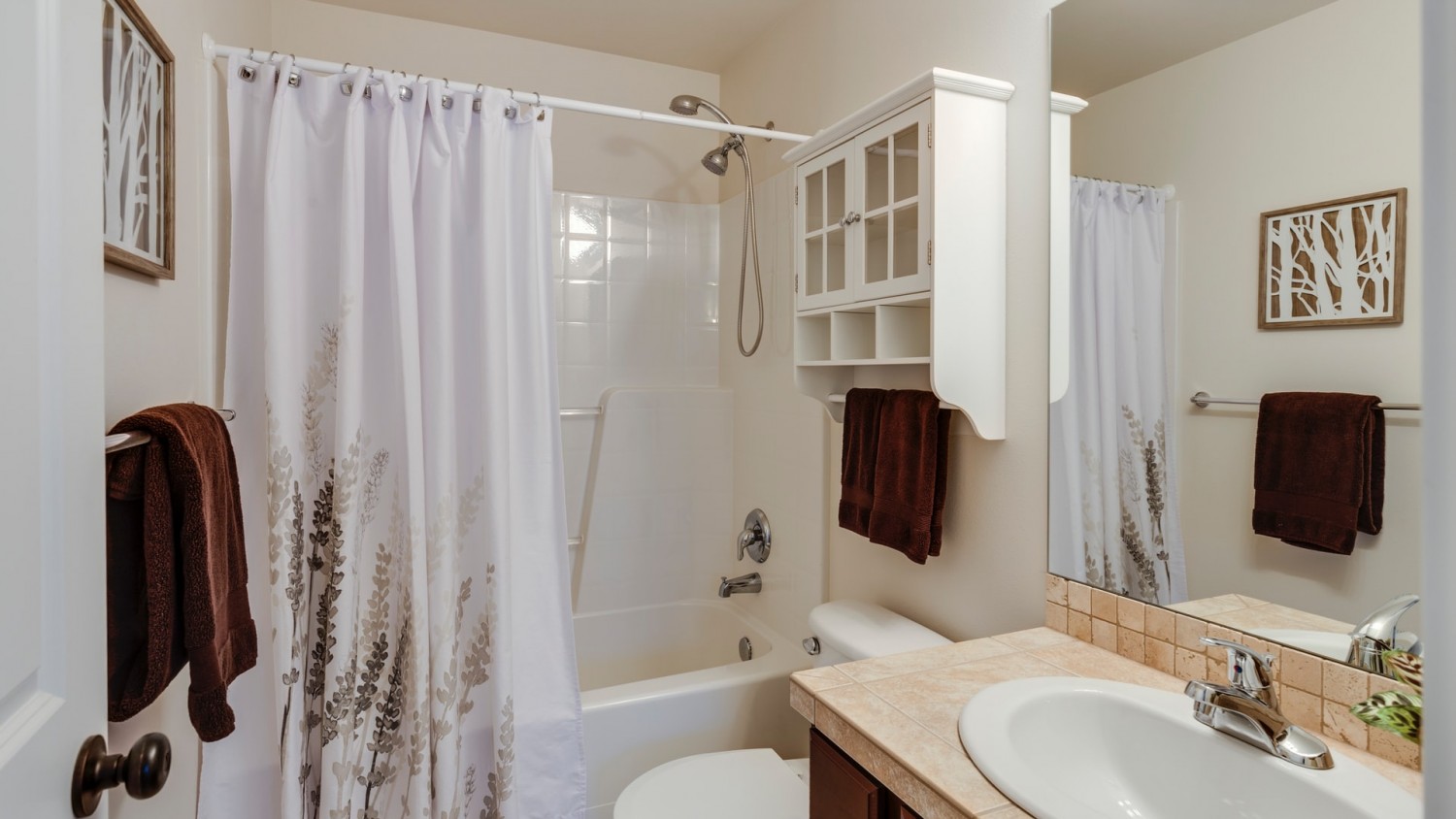